It’s the end of the month! This is what I’ve been working on for January…

New date scenes for the knights. I realised that outside of evening visits (read: explicit content) you don’t actually interact with your chosen love interest at all in January, which is obviously no good. Here’s a sneak peek of Areli’s date: 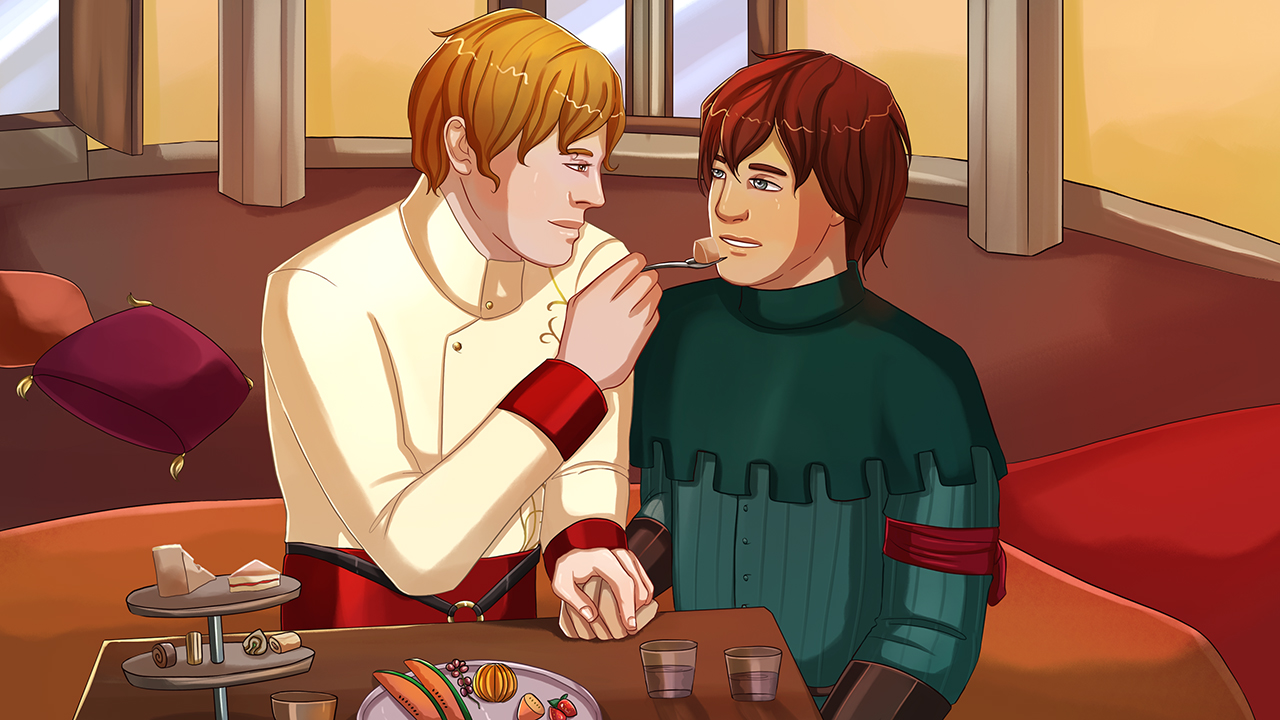 The start of a darker story arc. The events in January can lead to some darker explicit content (which is opt-in and clearly flagged) involving Gray, a physician involved with Leith’s family. I’ve made a post explaining this more clearly here  (tw for discussion of non-con).

Sprite improvements. Since Dr Gray stops being just a background character in January, I figured he was due a facelift. I honestly hadn’t realised how wonky (and weirdly coloured) that old sprite looked until I redid it! I’ve redone all his facial expressions as well and I’m pretty happy with the improvements:

Writing. I… can’t really show that one off, but I haven’t been happy with January’s writing so it’s still being reworked. I’ve yet to write those new date scenes too, which are a little complex due to multiple dialogue trees, depending on how Leith is faring in various skills.

Patron gifts! Aeolia has donated very generously for the second month in a row – for month one they got a sketch of their choosing, and for month two they’ve requested it was turned into a full CG. This won’t be in the game, but it did turn out pretty nicely, so I figured I’d share! Well, share a censored version (sorry!)

I’m making steady progress but I feel there’s still more to do, so next week doesn’t look likely for new content. Maybe week after? So long as I can get it done before NaNoRenO in March anyway (still debating whether to use NaNoRenO to get a chunk of Squire done, or do another side project…) Tumblr/patreon folks, I’ll see you then.

Wow the improvement is so huge on the doctor's sprite! Congrats!

Also, I think I need to say it - it's so considerate of you to warn people about the upcoming themes and adress this stuff in details for those who want to read it. You didn't really HAVE to put exteded explanations on it, as many creators don't, but you still did, and it's very nice. Now, as I'm a person who  throroughly enjoyed Corrupter, of course I'm not one of the people who'd be bothered by the themes per se, but I'm the kind of person who may be very upset depending on the character it happens to, so I was glad I was able to check in the link. As you may remember, Errol is my favorite character, and I think I would be genuinely distressed if it was directly about him.

Anyway, I may be able to become a patron starting next month, and it makes me happy. If I can afford it, I'll gladly take the tier that allows me to get a sketch. On that matter, do I have to ask for one of the knights if I do so, or can I ask for any character? Bet you know where I'm getting to with that XD

To be fair, I don't think I put enough of a warning on Corrupter - because I'd work on it, I think I got a little desensitised to just how dark it actually was, haha. Of course, I also felt like it was pretty clear what you were getting into with a game called Corrupter.  Squire is a romance game (just... with gratuitous explicit content) and so it's less to be expected. I do intend to put a blunt warning in the game just before the scene can trigger, however jarring it is.

But it doesn't involve Errol directly no! I'm not sure I could bring myself to (also Errol is underage, though that's not wholly obvious given he's more mature than Leith sometimes...)

Great news if you want to become a patron - you don't need to, of course! Any support you can give it welcome, but never mandatory. The sketch reward was intended to be for Squire characters, but I don't see I couldn't draw one from a different fandom, so long as you can give me a link to a visual reference or something.

Haha, actually my question was SPECIFICALLY if the only characters for the sketch things were the knights, since I wasn't sure. I'm totally planning on asking for a character from the game though XD - I mean, how could I NOT ask for Errol

Replying on this old thread since we were talking here haha

Last month was WILD, but I finally managed to send some money via Patreon - yeah, I know, it's almost the next month, but oh well XD

I've send enough for the tier that allows me to get a sketch (from the kurozora.konoi e-mail if you want to check), so I'd love to discuss what I'd like, but well, tell me if you'd rather do it here or by mail. I'm fine with both!

On a side note, maybe I'm derping, but I can't manage to find the Patreon version of the demo - any help? XD

Thank you so much for pledging! I didn't get your email unfortunately, but you can message me what you'd like over Patreon and I'll have the sketch done. With your permission, I'll show it off for everyone to see too - or you can keep it for your eyes only if you prefer.

The patron download is buried somewhere in the old posts on Patreon but I'm going to release a new update in the next 1-2 days, so I'd hold out for that instead! That means there's a new public release on the way too...

Thank you! I'll go and look how to message you over on Patreon!

And sure, I can wait for the new release